An Extraordinary quantum COPD Treatment is now now available to you

Take a deep breath because now you can benefit from a quantum COPD Treatment, with amazing results from…

Take Full Advantage of this Amazing Quantum COPD Treatment, and rapidly restore your respiratory tract has begged for…

Like most people diagnosed with COPD, Chronic Obstructive Pulmonary Disease, you have already suffered with shortness of breath, tightness in your chest, wheezing, and maybe an annoying chronic cough that forbids you from relaxing, because it feels like every breath might be your last.

Just ascending a few steps is an ordeal.

Enjoying a walk outdoors, a thing most people take for granted, has painfully become a distant memory. You wish you could wake up in a different reality but the incessant inflammation of your respiratory tract prohibits you.

As you continue to live with this terrible, life-threatening respiratory system disease, your energy plummets, and never bounces back.

While inhalers temporarily relieve inflammation, which is lifesaving, they never rid the deep rooted causes of your respiratory illness.

Oxygen therapy is welcomed but never provides you the healing you deserve.

You’ve tried breathing exercises and notice little or no relief from your problems breathing.

You’ve grown tired of depending on the medications and you want answers.

You want to impress your pulmonologist with an outstanding performance during your follow up visit and prove that you are reversing your COPD. 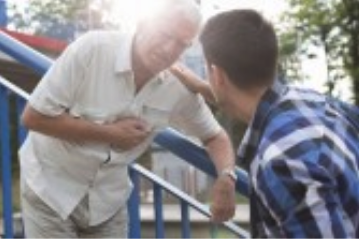 The Good News with COPD Treatment Is...

I have found the underlying root causes of COPD – Chronic Obstructive Pulmonary Disease. And I have developed highly effective and very safe protocols, customized to the individual patient’s needs, which have helped all of my patients rid their respiratory illness rapidly.

In all cases, the underlying root causes of COPD are chronic, once hidden COPD-causing infections and toxins which are often found in the lungs, trachea, bronchi, diaphragm and areas of the brain that control breathing.

In patients, with COPD, I uncover chemicals like anesthetics used in dental work, mercury and pesticides, lodged in respiratory tissues.

Inhalation of cigarette smoke, 1st & 2nd hand smoke, are often contributors to respiratory system diseases. Asbestos might be a cause for some. Other chemicals like anesthetics used in dental work, mercury and pesticides are often found in my exam process.

Infections like strep bacteria, influenza virus are commonly found in my patients, during my unique exam. Although, I do find many other infections causing COPD like staph bacteria, candida and aspergillis fungus, black mold and many different viruses. Sometimes even the elusive Lyme disease can be the main cause of COPD, chronic bronchitis and asthma.

Mr. Cruz arranged a phone consultation with me. He was the only person I was able to speak with.

The reason? Mrs. Cruz could not speak a word.

Her inability to speak was caused by a dreadful tightening of her chest which, a frightening shortness of breath and an exasperating cough. All of these symptoms plagued her for 8 long months. Every day and every night.

And, these life-threatening symptoms started suddenly after a rigorous workout.

Sleepless nights followed by days of exhaustion became her life.

A claustrophobia-like feeling cocooned her in a bubble of anxiety.

Multiple visits to the ER, cardiologists, and an ENT doctor could put their finger on why she suffered COPD.

The causes of her frightening symptoms were never determined…until she came to my clinic.

No effective treatment was offered by her doctors…until she came to my clinic.

Quickly I uncovered her respiratory system was infected by various viruses and bacteria.

Adenovirus and Polio virus infected her trachea and her lung tissues.

H. Influenza bacteria was revealed as the invading organism stressing her diaphragm and her lungs and sinuses.

Safe and highly effective liquid drops were provided to this patient immediately. The purpose? To enhance her body’s ability to swiftly eliminate these infections.

3
Here is the summary of my findings:

Inability to speak a word due to symptoms of COPD caused by:

Adenovirus and Poliovirus stressing her trachea and her lungs

H. Influenza B bacteria stressing her diaphragm and sinuses.

These drops helped her rid these previously undiagnosed COPD-causing infections.

She quickly noticed an incredibly dramatic improvement in her health.

Her cough, which mystified her previous doctors, stopped abruptly in 3 days after she started this safe and effective treatment.

Within 7 days of commencing her customized healing protocol, her shortness of breath and tightness in her chest symptoms promptly ceased to exist.

Tightness of her chest – Gone!

Her ability to speak returned within 7 days of beginning her treatment!

Her beautiful voice was heard, once again, by all of her loved ones!

I went to Dr. Herman and got more benefit that I could ever imagine possible.

My shortness of breath due to my COPD had relieved by 75% in less than 3 months of his care.

I discontinued use of my medications for COPD as a result! With anger I keep asking, why didn’t my COPD specialists know what to do, to help me find the relief Dr. Herman did so quickly?!!”

“When I saw Dr. Herman for my first examination I could barely breathe! I was gasping for air for 8 months! I was coughing constantly day and night. Medications did not help. 7 days into my 1st protocol, from Dr. Herman, my cough stopped and my shortness of breath stopped! He is amazing!”

I have dedicated my life to help people find relief from their chronic disease.

Along my journey of becoming the physician who can help you recover from your chronic respiratory illness I have realized it is not about treating the COPD -Chronic Obstructive Pulmonary Disease.

And it is not about following only what the mainstream conventional physicians offer you.

It is about, first, listening to the individual.

Then it is about being an open minded physician who carries a unique skill set in pinpointing and safely removing the once hidden, and all too often overlooked, causes of COPD.

I’ve sacrificed thousands of hours of my time so I can provide you outstanding care and produce results your doctors thought impossible.

You have nothing to lose except your inability to breathe properly.

Let’s begin to help you rejuvenate your respiratory system so you have relief from this debilitating Chronic Obstructive Pulmonary Disease.

My extraordinary COPD treatment will put you quickly only one step away from getting back the life you desire.

Take action now. You can really get well.