Forget You Ever Suffered from Interstitial Cystitis…

Interstitial Cystitis can be the most debilitating and torturous condition.

Not only does it cause extreme pain and burning sensations, it also becomes the key theme of a person’s day.

Debilitated by pain and constant sensations of fullness in the bladder, it affects all your daily activities and severely impairs your intimate relations.

If you have received this diagnosis, you have most likely been prescribed a plethora of medications, none of which worked, and your condition got progressively worse.

You may have even received anxiety drugs and counseling to alleviate your depression and anxiety, which becomes a secondary condition for all Interstitial Cystitis sufferers.

We have some really good news for you… 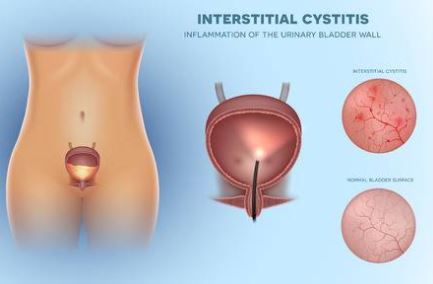 Interstitial Cystitis can be aggressively and effectively addressed, with extraordinary results, with the powerful proprietary method I developed.

I have helped thousands of people completely get rid of its devastating effects.

The method I’m using is unique and works fast.

I discovered Interstitial Cystitis is caused by hidden infections and toxins which typical doctors completely miss.

They just don’t have the diagnostic tool and expertise.

I’ve also developed Rapid Health Restoration System which is a unique examination process I use to develop safe and powerful bladder restoration protocols that include liquid drops, uniquely designed to enhance your ability to remove these IC-causing infections and toxins from your body.

Each patient is different and requires a uniquely prescribed protocol designed just for them.

When you come to my clinic, you will be treated as a unique individual and receive a custom treatment, designed just for you.

Here’s an Amazing Transformation of One of my Clients…

When Amanda Verde came to my clinic, she had exhuasted all the medical avenues to receive help. She has seen every specialist under the sun who tried to help her since she was in the fourth grade.

As the years went by, she got progressively worse.

Her symptoms included pelvic burning sensations, irritable bowel syndrome, and irritating migraines. In addition, she suffered from ADD for all the years in school, continued need to go to the bathroom every 15 minutes, debilitating fatigue and lethargy which she attempted to sleep off.

She slept in a fetal position trying to relieve the pain in her bladder. Doctors gave her every kind of antibiotic including doxycycline, amoxicillin, and Flagyl.

When I examined her, I discovered a plethora of toxins and infections in her body. For example, I discovered tetanus and scabies infection, as well as Epstein-Barr virus in her brain.

The part of the brain containing these infections is directly responsible for controlling the bladder, the kidneys, and the pelvic muscles.

When the bladder is infected, it can lead to spasms of the pudendal muscle which is found in the reproductive area.

When I examined her pudendal muscle, I found a significant amount of streptococcus and staphylococcus bacteria which caused inflammation of the muscle.

I discovered that her bladder was infected with different kinds of mold and enterococcus bacteria, in addition to parasitic infection, and cerabral spinal fluid infection.

The pudendal muscle is  found in the reproductive area. When it is infected, it creates a sensation of pain in the bladder.

After diagnosing the cause of her urgent IC condition, my lab prepared a number of safe and powerful liquid drops which helped her eradicate the infections in her body.

Her symptoms completely disappeared and she no longer had to sleep in a fetal position.

She is now completely symptom free.

Urgency decreases from every 15 mins to 2 hours

No longer had to sleep in fetal position

Before: Judith Klassen, 31 years of age, mother of 1, Canada

Judith was diagnosed 10 years ago with a severe Progressive Multiple Sclerosis.

Due to her MS she had zero control of her bladder.

Her bladder was so overactive and uncontrollable that she would instantly void as soon as she began to drink even a small amount of fluid. For many years she had to sit on the toilet bowl while drinking because she suffered an immediate release of urine as soon as began to drink.

The only way she could drink was to have her husband pick her up from her wheelchair and move her to the toilet bowl. Otherwise they encountered a terrible mess.

During my unique examination process, I uncovered the real reasons why she couldn’t hold her bladder for even 1 minute while drinking liquids.

A toxic substance used in dental work and epidural injections was saturated in and destroying the bladder controlling parts of her brain. The toxin was Lidocaine anesthetic.

Her brain, her glial cells which repair nerves, her hypothalamus which controls release of urine from kidneys were all poisoned by leftover residues of this anesthetic.

Also, she was infected with Lyme disease infections in her Cerebrospinal Fluid and on her myelin sheath.

Her renal artery was embedded with influenza virus. This directly stressed the kidney function.

Toxic mercury was found in her blood which affected the ability of her brain to control her bladder, and it directly hurt her bladder too.

Here are my findings:

Lidocaine anesthetic was found in:

Her blood was loaded with Toxic mercury which affected her brain and her bladder.

After her examination, I developed a safe and effective protocol, with liquid drops that enhanced her body’s ability to eliminate these infections rapidly, so she could begin to recover control of her bladder.

She and her family were stunned by the rapid and amazing transformation that Judith experienced.

Within 2 months she could hold her bladder for 15-25 minutes after she drank fluids.

After 5 months she was ecstatic because, after many years of suffering overactive bladder and incontinence, she was able to hold her bladder for 6 – 7 hours after drinking.

Today, more than 1 year later, she still has perfect control over her bladder.

Her overactive and incontinent bladder has now become a distant memory.

Incontinence no longer existed for her

My doctors kept telling me I had no chance of every having a normal urine bladder function for the rest of my life. I am so happy I found Dr. Herman because he helped me prove them wrong. My family and I are so grateful for what he has done for me. In addition to my delight that I can hold my bladder again, I am amazed with how rapid the changes took place.”

If you want to get rid of Interstitial Cystitis, take advantage of the extraordinary Rapid Health Restoration System which is designed to rapidly remove the root cause of your condition.

You will experience rapid and profound relief from your symptoms and claim the life you deserve.

If you have suffered from chronic bladder disorder, come and see me.

This will be the beginning of a completely different, pain and stress-free life for you.

“After you watch these entire videos, you can finally begin to embrace the reality that you can stop your
bladder disorder and urgent and frequent trips to the bathroom!”
~ Dr. Lonnie Herman

Watch These Transformational Testimonials of
Bladder Disorder and Interstitial Cystitis…