The Pain of Peripheral Neuropathy Can Become a Past Nightmare…Gone Forever!

If you are suffering from Peripheral Neuropathy, you have been riddled with pains, tingling, numbness, and even burning sensations throughout your body.

You are probably very frustrated because none of the medical interventions, tests, and imaging studies have provided you with any relief.

You’ve tried all kinds of therapies, stem cell treatments, and counseling, and Nothing helped.

You have reached the end of the road and are desperate to find a solution.

There is good news though… 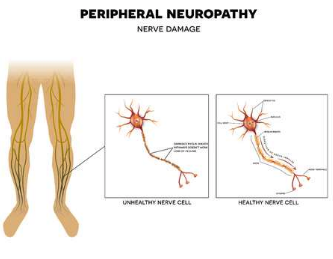 Peripheral Neuropathy can be erased.

I have discovered the root cause of your problem, which is always hidden infections and toxins lodged in your central nervous system and other parts of your body.

These toxins and infections are always overlooked by doctors who have not yet found a cure for your problem.

I took a different route, out of the box route to restore your health.

I have created highly specialized protocols, customized to the individual patient, to rapidly remove these neuropathy-causing infections and toxins from your body, leading to rapid restoration of normal nerve sensations.

Thousands of my patients have fully regained their pain-free lives.

Here’s An Amazing Transformations of 2 of my Clients…

When Robert came to my office, he has been suffering for 8 years with severe progressive Peripheral Neuropathy.

He was in constant pain. His symptoms included constant burning in his legs and feet, with a pain level of 10.

His legs became so weak that he couldn’t squat and was hardly able to go up the stairs.

In addition, he suffered from soreness in his testicles, constipation, and liver pain.

During my interview with him, I found he has had chemotherapy 12 years earlier and a knee replacement procedure.

When I examined him, I discovered that his kidneys were severely infected with mold, staphylococcus bacteria, and malaria parasites.

His kidneys were severely contaminated with chemotherapy agents.

The cortex of his brain was filled with malaria parasite.

The cortex of his brain, which contains thousands of sensory nerve roots and motor neurons were filled with Lidocaine.

He had severe infections throughout his body.

His kidneys were severely infected with:

The cortex of his brain was filled with:

The second examination revealed his glial cells, which repair nerves, create myelin, and protect the nervous system, were filled with:

The cortex of his brain, which contains thousands of sensory nerve roots and motor neurons were filled with:

Local anesthetic, numbing agent used in dental procedures, was actually embedded in areas of his brain which allow sensations in the feet. Lidocaine numbs tissues in your mouth. How good can the sensory controlling areas of your brain work when this numbing chemical becomes lodged inside?

“Furthermore, when the glial cells that repair nerves are toxic and infected how can they possibly repair nerves?”

After he completed all my unique protocols, the pain in his feet completely disappeared.

His liver had no more pain, and his constipation vanished.

He has gained incredible strength in his legs and is able to walk up the steep stairs that crippled him before.

All the pain in his body vanished and he “has more energy than he has had in two decades”.

His pain in his feet completely disappeared.

His liver had no more pain.

All the pain in his body vanished.

He "has more energy than he has had in two decades."

Joshua Peal told me, he was sure he was dying. He was completely crippled by the pain that felt like his entire body was being stabbed.

His feet felt like they were broken to pieces and continuously bleeding.

His multiple visits to the ER only resulted in doubling his recommended dose of Neurontin, which never worked.

Multiple specialists were unable to give him any relief.

16 months before his unbearable nerve pain started, he was dealing with uncontrollable tachycardia with a resting heart rate of 120 beats per minute.

He was also diagnosed with Type 1 diabetes. His doctors blamed his unstoppable nerve pain on his diabetes. They modified his peripheral neuropathy diagnosis to Type 1 Diabetes Mellitus with Diabetic Neuropathy.

When I examined him, I discovered that his cerebral spinal fluid was severely infected with malaria, influenza virus, Epstein-Barr Virus, Lyme disease and treponema bacteria.

His spleen was severely infected with the treponema bacteria and malaria, which was also infecting the white matter of his central nervous system.

After Joshua’s first visit me, I developed specific protocols to remove those infections from his body.

Soon after, he started walking without ANY pain.

His second visit with me, he had malaria parasite in his blood and kidneys, which also contained significant amount of Lidocaine and mercury.

The second protocol I gave him, rapidly eliminated the remnants of the heel pain, and massively increased his energy levels.

In his third visit, I discovered that he had infections in his teeth that also infiltrated the cortex of this brain, kidneys, and his spinal cord.

When we removed these infections, he became “a new man” who embraced his life with excitement and curiosity.

His cerebral spinal fluid was severely infected with:

His spleen was severely infected with:

These were infecting the white matter of his central nervous system.

After Joshua’s first visit me, I developed specific protocols to remove those infections from his body.

Soon after, he started walking without ANY pain.

His second visit with me – I discovered in his blood and kidneys significant amounts of:

The second protocol I gave him, rapidly eliminated the remnants of the heel pain, and massively increased his energy levels.

In his third visit, I discovered that he had infections in his teeth that also infiltrated the cortex of this brain, kidneys, and his spinal cord.

Joshua came to my office three times and each time he received specific remedy protocols to remove the infections lodged in his body.

He is now completely pain free, filled with energy, vitality and renewed passion for living a full life.

He started walking without ANY pain.

Rapid Health Restoration System completely erased the symptoms that were destroying his life.

He is completely pain free.

His resting heart rate dropped from 120bpm to 70bpm!

If you are crippled by progressive Peripheral Neuropathy, you can look forward to a pain free joyous life.

I have successfully helped thousands of patients whose lives were being completely destroyed by the crippling effects of the condition that no doctor could successfully treat.

If you want relief from the devastating effects of Peripheral Neuropathy, book an appointment at my clinic and take charge of the future that is bright indeed.

I’m looking forward to becoming a part of your health restoration!

Watch How Neuropathy Was Gone in 1 Visit…