Are You Ready to Finally Find & Remove the Root Causes to Your Sinus Symptoms?

Have you been suffering from sinus congestion and sneezing or nonstop post nasal drip.

Have you seen medical doctors and experts who prescribe you antihistamines, antibiotics and various medications – none of which worked.

You may have undergone surgery for deviated septum, and you are still suffering from sinus congestion and sneezing. 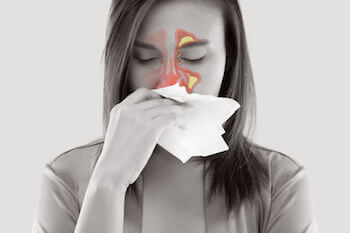 The good news is that sinus congestion can be rapidly relieved.

I have developed a unique examination process to diagnose the root causes of sinus congestion.

In each case, the root cause has been hidden infections embedded in the sinus cavities, as well as infections and toxins lodged in a client’s body.

I’ve developed protocols to safely remove these previously undiagnosed infections and toxins. This process has rapidly uncongested the sinuses, stopped the runny noses, stopped the post nasal drip, stopped the sneezing and stopped the almost never-ending use of Kleenex, in every single patient that I’ve seen.

If you’re serious about getting rid of sinus congestion, sneezing, and post nasal drip – click on the link below and make an appointment at my clinic.

Help is on the way and you will soon experience a life free of sinus congestion, sneezing, and irritating post nasal drip.

Lorraine is a successful and avid marathon runner who has completed hundreds of marathons in her life.

When she came to my clinic, she was constantly sneezing. Her sneezing was extremely loud and happened approximately 5 to 6 times every hour – every day, and for months at a time.

She actually was sneezing nearly 200 times in 24 hours day in and day out. That gives you a good idea of the severity of her condition.

All of the nasal sprays and decongestants she used provided no relief for nearly 8 months!

When I examined Lorraine I quickly discovered that her head was filled with multiple infections and toxins.

When I examined her nasal mucosa, I quickly discovered multiple sinus-irritating infections which were some of the usual suspect, California encephalitis virus, Streptococcus pneumonia bacteria as well as multiple fungal infections and dust particles that carried bacteria and mold.

She also had parasitic infections in the nasal mucosa as well as Colorado tick fever, black mold which is also known as stachybotrys.

Her sphenoid sinus was filled with St. Louis encephalitis virus and Zika virus as well as streptococcus pneumonia bacteria.

Her pleural cavity around the lungs had large amounts of St. Louis encephalitis virus which can cause tremendous histamine release – which indirectly causes sinus irritation and runny nose.

When I examined her nasal cavities and her sinus cavities, I quickly found mold fungus and parasites which caused swelling of her nasal nucosa.

These infections can go to a person’s brain and the brain stem creating brain fog and headaches.

BEFORE: All the Toxins and Infections I found causing havoc in her head...

I quickly developed her customized sinus and nose healing protocol that contained potent drops, that were produced in my lab, to help enhance her body’s ability to rid these infections, for which once she took, rapidly caused a reversal of her symptoms.

She is now completely symptom-free.

Her sinus congestion and postnasal drip are just a distant nightmare.

All symptoms are - GONE!

When Jessica came to my clinic she suffered severely swollen turbinates.

When I physically examined her nose, I could not even see inside as there was no room. The turbinates inside her nose were so swollen, they were almost completely closed.

She had seen multiple doctors who all recommended surgical removal of her turbinates.

They were so swollen that she could not breathe at all, and tried using different nasal sprays to relieve the swelling but it didn’t work.

She also suffered from chronic cough and shortness of breath, which frequently woke her up at night – indirectly causing severe fatigue during the day.

When I closely examined Jessica, I discovered that her nasal mucosa, sphenoid sinus, frontal sinuses, as well as her lungs, were infected with adenovirus, influenza virus, Zika virus, chikungunya virus and tetanus bacteria.

All those infections caused swelling in her nose and caused respiratory stress.

BEFORE: All the Toxins and Infections I found causing havoc in her nose and sinuses...

Her nasal mucosa was infected with:

Her sphenoid sinus was infected with:

Her pleura was infected with:

Her frontal sinuses were infected with:

Her lungs were infected with:

I developed specific parameters to alleviate her symptoms and she quickly experienced a complete relief from her sinus congestion and nasal turbinate swelling.

She could sleep at night again, started breathing normally, and completely forgot that she ever had sinus problems.

No cough 3 days after administering my protocols!

7 days after treatment - NO shortness of breath!

60 days after treatment, turbinates swelling down 80%!

Sinus congestion can be caused by many factors such as multiple infections and toxins.

When these specific infections are pinpointed, I develop precise protocols to eliminate them.

Once administered, they faciliate rapid and profound relief of your symptoms.

You can naturally put your sinus congestion in the past!

“I couldn’t breathe through my nose for 8 to 9 months. The EENT doctor I saw told me I had to have nose surgery to remove the swollen turbinates in my nose. The nasal sprays he prescribed me provided no relief. I was coughing constantly and I could only take shallow breaths through my mouth because I was so short of breath. My husband drove me, for 3 days, to see Dr. Herman because I couldn’t fly in an airplane. Within 3 days of my 1st protocol my coughing stopped! 7 days into my protocol my shortness of breath stopped and I could breathe through my nose again! What Dr. Herman does is amazing!”
Jessica Cruz
“I sneezed violently, 200 times a day, every day, for 8 months with no relief from various remedies and nasal sprays. I also used the netti pot which actually caused my sneezing to get worse. Dr. Herman’s method stopped my sneezing so fast. Everyone who suffers sinus congestion and constant sneezing should go to Dr. Herman. He finds the root causes and helps you eliminate them!”
Lorraine Shute